The College of Music at NTNU, the most prestigious music education institute in Taiwan, offers a program of study that balances musical scholarship and performance and is grounded on the resources of a major research university. The department began with a 2-year course led by Prof. Er-Hua Hsiao in the Provincial Taiwan Teachers’ College (now NTNU) in 1946, aiming to sculpt the expertises of the middle-school teachers. During the years of 1946-1949, not only the enrollment increased dramatically, but a new 5-year course system was also founded under the direction of Prof. Tsuei-lung Day.
Striving for excellence in education, the Provincial Taiwan Teachers’ College was upgraded to the Provincial Taiwan Teachers’ University in 1955, and subsequently upgraded again to the National Taiwan Normal University in 1967. The College of Music was officially branched from the College of Literature.


During a 10-year reign of Prof. Jin-Hong Chang and Prof. Da-Sheng Chang from 1972 to 1982, the department had been embodied with the enlarging faculty and increasing instruments and equipments. Realizing the lack of attention to musicology and basic music research, the department established the first music graduate school of the country in 1980, which was divided up into 3 distinctive programs: Musicology, Composition, and Conducting, led by Tsang-Houei Hsu, De-Yi Liu, and Da-Sheng Chang respectively.


In August 1982, the College of Fine and Applied Arts at NTNU was founded, and it embraced the College of Music and Music Graduate School. Due to the lack of well-trained music teachers in the country, the department yet added another program- Music Education, led by Prof. Dao-Hsiong Tseng and Prof. Mao-Shuen Chen.


In 1985, Prof. Mao-Shuen Chen was assigned as the chairman of the department, and he founded the Association of Music Education, the first in the country, which had continuously contributed to music education ever since.


In 1992, under the direction of Prof. Tsang-Houei Hsu, the Music Graduate School established the program of Performance, aiming for students who specialize in all different kinds of instruments. Among the department alumni, many have become distinguished and world-renowned performers.


During Prof. Yu-Xiu Chen’s reign as the chairwoman, the department began to focus on participating in the community and social activities: such as the department hosting the NTNU Arts Fair, and increasing the opportunities of student recitals and facutly concerts.


In 1997, Prof. Yu-Hsiu Chen was promoted as the Director of College of Fine and Applied Arts, and Prof. Jing-Mei Lee as the chairwoman of the department. They devoted themselves to the reformation of the College of Fine and Applied Arts: balancing between the obligation of “train the trainers (teachers)” and the significance of uplifting the creative and performing levels to all faculty and student members. For this, improvements were realized by distinguishing the faculty’s expertises, individualizing the instructions, substantiating the performance opportunities, etc.


In 2001, the Graduate School of Ethnomusicology was founded under the direction of Chairman Shan-Hua Chien. It was also the first Doctorate Program in Music in Taiwan. With the increase of international collaborations, the department had invited outstanding musicians such as Prof. Jose Maceda (University of the Philippines, Professor of Ethnomusicology), Prof. Pi-Hsien Chen, Director Raimund See and other world-renowned musicians to the department. The department had also hosted numerous musical events such as “300 Years in Piano Composition Seminar”, “Music Education Seminar”, “Professor Cui-Lun Dai Memorial Violin Competition”, etc.


From 2004 to July 2008, as a chairman of music department, Prof. Fang-Long Ko, has devoted himself to promoting contemporary music practices in the department. In addition to expanding the international collaborations with musicians and scholars form various countries, he has gotten the department’s Symphony Orchestra to involve with the performances of the 20th- and 21st-century music repertoire and faculty’s new compositions. He also has held a lecture series of “Music Phase” which has provoked discussion in every aspect of contemporary music. He has provided full assistance to the performance of the entire Poulenc’s opera “Dialogues des Carmelites,” which was recently premiered in Taiwan by almost the entire student and faculty members in November 2004.


Since August 2008, Prof. Ming-Hui Lin, an outstanding pianist and music education scholar, was assigned as our chair person.


In 2012, Prof. Ai-Lin Yang has become the new chairwoman of the department.


Among the department alumni, many have become distinguished and world-renowned musicians since the department had been established half a century ago. From past to present, the leading Department of Music in Taiwan continuously brings to talented students a wide variety of musical perspectives, aesthetics and techniques, and assists them to discover their individualities in this diverse 21st-century.

Brown Line(BR08): Get off at 'Technology Building' station, and take the bus to Shida station.

Green Line(G09): Get off at 'Guting Station', and walk about 5 minutes.

Orange Line(O05): Get off at 'Guting Station', and walk about 5 minutes.

From the Taipei Main Station (train)

Getting here by bus 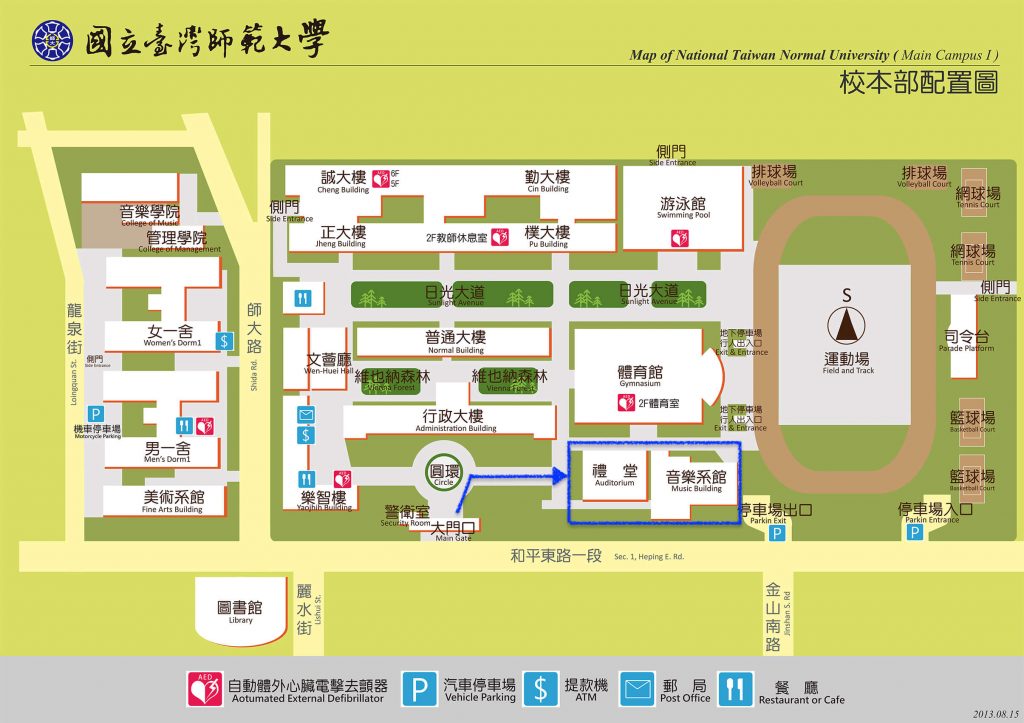